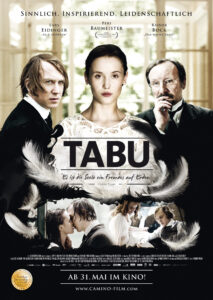 When Georg Trakl pursues his studies of pharmacy in Vienna, his sister, the strong-willed, seventeen-year-old, highly talented pianist Grete (17), forces her permission to follow him to Vienna. She wants to go to the music academy, but above all she wants him - completely and now, uncompromisingly against all rules. She sweeps aside all scruples and guilt and inspires her brother to write his first mature poems. Months of unadulterated happiness follow. Grete dreams of emigrating to Australia, of a life together where no one knows them. But reality catches up with her: Torn, between feelings of guilt and euphoric fulfillment, Georg's work unfolds, but at the same time the sense of guilt and the social pressure on the forbidden love overwhelms him. Georg capitulates and, as so often before, takes refuge in heavy drug use. Grete neglects her music studies and loses herself in a desperate struggle to find a place at his side. When her mother makes Georg, of all people, her guardian, she has to give up: She, too, narcotizes herself with drugs in order to comply with Georg's wish to marry her music teacher, who is 30 years her senior. From now on, Georg styles her as an unattainable idol, the center of his entire oeuvre, and for the first time experiences widespread recognition and success. Grete, on the other hand, abandons her own promising career as a pianist. When she discovers that Georg is threatening to fall in love with a fellow poet, she feels definitively betrayed by him. She seduces her brother and conceives a child by him. Georg's nightmare thus becomes reality and his guilt becomes visible to all. Grete, on the other hand, finds an unexpected equilibrium through her pregnancy. However, it is only the calm before the storm, for she loses the child and almost dies as a result of the loss. While Georg nurses her back to health, the two manage to reconcile with each other and with their fate, which forces this love upon them, a love for which there is no place in the world, at least not in this...